Sometimes I think I either don’t understand half of what’s going on, or it’s constantly changing and I’m not keeping up. I wish I really understood Italian.

This morning was a whirlwind. Last night I thought I was giving Michele a fierce “I’ll never see you again” hug. And this morning I was giving him my sleeping bag to add to his backpack before having it mailed ahead to Nájera. I thought he was going to stop in Ventosa, the town before this one, which would’ve offset our caminos, probably for the duration of the trip. But here we are in Nájera! We rushed out of the hotel to a nearby cafe, out of the cafe to the street, and started walking. Danilo walked faster than the rest of us and before long he was out of sight.

The sun was mostly hidden behind clouds today, so the way which would otherwise have had a few nice vistas was a bit boring. There was a mild elevation gain, but nothing really challenging. The pain did come back in my ankle, but after stretching it and following some posture advice from a Spaniard, and taking care to make sure I always do a full heel-toe roll with each step to stretch the muscle, things seem fine now. The Spaniard’s advice was to keep your gaze farther into the distance rather than close in front. 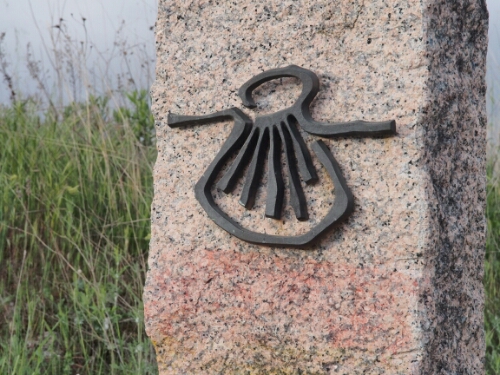 The new shell symbol now that we're in La Rioja

I’ve been concerned about what will come after the Chiara and Lidia leave. Sarah has contacted me by Whatsapp. She’s a speed demon though; racking up a ton of kilometers per day. We’ll see if she slows it down a bit so we can meet in Grañon tomorrow. 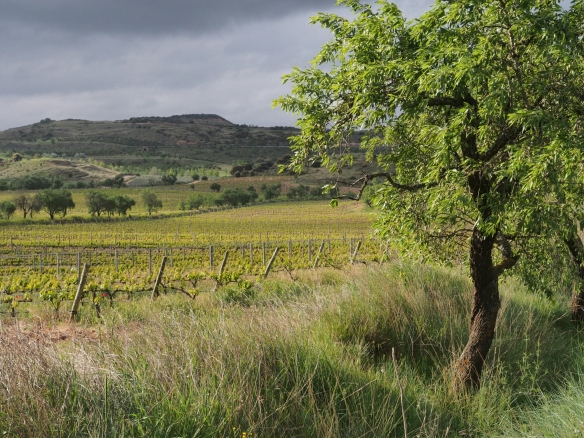 Tonight has been restful. Everyone other than Danilo and I found today to be really tough, so they’re all tired and eager to relax.

We wandered through the town and discovered that today is medieval/renaissance festival. Archers, swordsmen, a tent full of falcons, merchants, more. All the people were out in the streets and the kids playing. Michele didn’t feel well, so Lidia, Chiara, Danilo and I went to a nearby restaurant for the pilgrim’s menu while he slept. Now here we are in the albergue again, winding down before an early morning tomorrow.

It’s a long way to Grañon.