Today was the most difficult day, and also the easiest. Nearly 30 kilometers. But first, yesterday.

We walked yesterday from Puente la Reina to Estella, leaving when the sun was barely out. For the most part, the walk was uneventful. And except for a few beautiful vistas at the beginning it wasn’t much of a spectacle. The most beautiful view came as we approached what I believe was Ciraqui. Set on a hill, the earth beneath it had long since been covered as buildings and roads sprouted up into a city of stone and cement and wood. From a distance it shined as sunbeams stretched across the fields to brighten it. 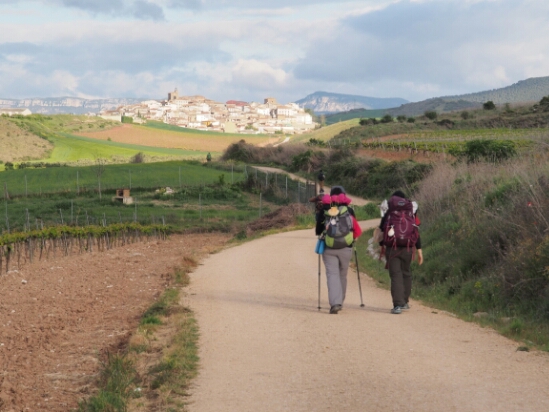 Once we passed it there was little else to see until Estella, except one abandoned house that stuck in my memory. It would have been beautiful once, before the broken glass and the graffiti. At some point it must’ve been some family’s pride and joy, newly built and painted, decorated, and cared for. And now nothing, just memories locked in stone and wood and shards. Can’t take it with you, as they say.

Michele cooked dinner. Pasta with shrimp and tomato — it was delicious. The shrimp was served the way the rest of the world does it, with head and legs on, not shelled and deveined. Fortunately I’ve gotten used to that. I’ve learned a thing or two on the Camino about etiquette. Mainly, accept what is offered quickly and joyfully. Even if your intentions are good (you want to make sure everyone has eaten before you take more for yourself), refusal can be seen as rude or as a sign that you don’t like what’s being given, especially if you lack the vocabulary to explain what you’re thinking. 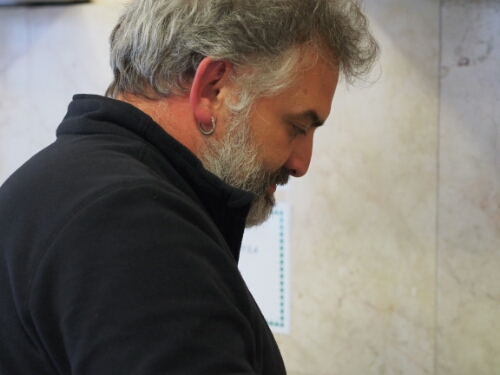 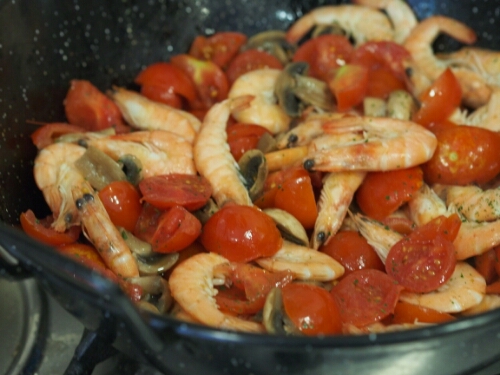 The strange dreams continue. One focused on my walking staff. In the dream I knew I had died over and over again and that the staff had somehow brought me back each time. I carried it with me somewhere religious, some temple like an amphitheater of stone. People in the dream questioned the importance of the staff, and as the dream went on I started to fear that it was in jeopardy, that it would be destroyed. I woke up, fell back to sleep, and had other bizarre dreams.

Today’s road was long but peaceful, mostly flat or downhill. Should’ve been a breeze, but as we walked the muscle along my shin began to spasm and hurt. The pain was terrible, forcing me to stop whenever it would shoot through my leg. Lidia and Chiara were concerned, but I tried to assure them that I could continue even though I wasn’t really sure.

Things I’d whisper in my head to keep going. We paused at food stand. I asked for ice and it was given. People were kind — they offered medicine, leg wraps, a ride to Los Arcos. Some I accepted, but not the last one. I’m walking the Camino, and only walking. No rides.

We kept going and passed through an area where the Way swept broadly and gracefully like a river out before us through the fields of a wide and long valley, past our sight. We swam down it until it veered to the left, and in time we arrived at Los Arcos. 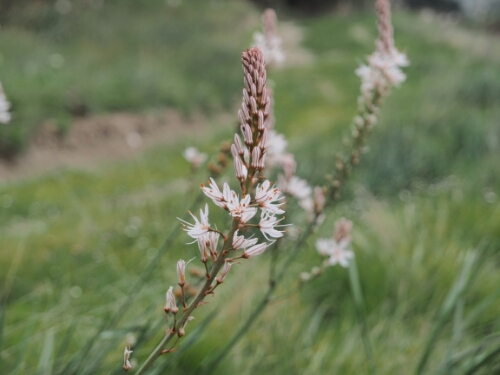 We intended to continue to Torres del Rio, and so we went on. The town fell away to reveal an unending plain, the road laying straight and flat before us towards the horizon. Here the pain disappeared and I forgot the weight of my pack, and we walked for the most part in silence save for scuff of boots and clack of sticks.

Without the physical distractions I’m used to on the Camino, the thoughts came flooding back. What will I do when I go home? Why go home at all? What am I walking towards? Certainly not Santiago. I rarely think of Santiago. The Italians have invited me to visit at the end of my trip. Why not? But oh, the rent payments. The job hunt. The desperate search for a new cubicle or desk to spend hours in front of while the sun is shining. The search for someone to travel with through life — LA’s absurd games and trivialities, the foolishness of falling for someone a continent away.

I pushed it all back out into the void where recurring quarter-life crises belong. The Camino so far has been delightfully free of thought. How many times have I tried to learn mindfulness by meditation exercises when all I needed to do was walk?

Eventually we reunited with Merel and Sarah, and we walked together much of the rest of the way, Sarah and I talking at the front. What we do, what it’s like, what we want from a job, the value of wealth, objects vs experiences, how we got here, where we’re going.

We split up just before arriving at Torres del Rio. When Lidia, Chiara, and I arrived, we found ourselves in the same room as Sarah, Merel, and Yannick, as well as Michele and Danilo. Shower, laundry, relaxing, beer, wine, dinner.

Dinner was raucous and joyful and everything I ever hoped the Camino lifestyle could be. I didn’t know I was looking for that until it was around me. Songs, pounding on the table, laughing until tearful, food, stories, wine. I probably missed half or more of the words themselves, but what does it matter? It was perfect.

Many of them will be leaving tomorrow at Logroño. I’ll miss them.

I may be getting a cold, or it may just be allergies. I wouldn’t be surprised by a cold, after all my body has been through in just a week, but I certainly hope that’s not it. We’re all in close quarters here and I don’t want to be patient zero getting everyone sick.