Written three nights ago (May 8):

Today and yesterday are a bit murky in my mind.

We left Burgos late, after breakfast and a visit to see the cathedral in the morning light. After some walking, and breakfast I think, Sarah went off on her own for some alone walking as she likes to do. 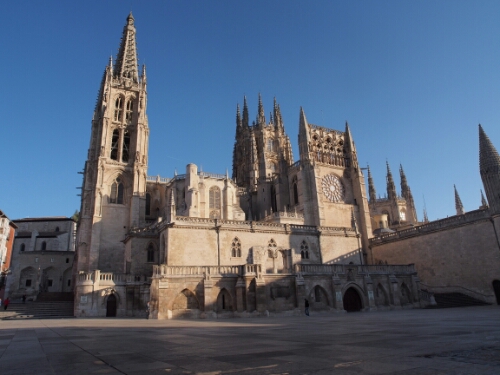 Eventually at my pace I caught up to her and a man named Jonathan, a French Canadian who lives in Vermont. He runs a farm where people with special needs can live and work, and has three children. He’s a deep thinker and a generous soul with a happy disposition, despite some difficult times he’s faced recently. He’s walked with us since.

He and Sarah both stopped in a glen thick with trees and shade. I continued, and walked up and out onto the meseta. The grassy plains stretched out before me and the sky was a great dome unbroken in every direction. Trees were few to none, and the sun hot. I walked on to Hornillos del Camino where I stopped for lunch. I didn’t know, after eating, if Sarah and Jonathan were in front of me or behind. So I went on alone into the heat.

I took some brief shade beneath the one and only large tree on the path.

As I passed a small albergue in the middle of nowhere, Sarah texted me that she’d booked us beds in Hontanas and that she had only just left Hornillos. I carried on. Five kilometers to Hontanas, a sign read. The sun baked the air around me. Onward. 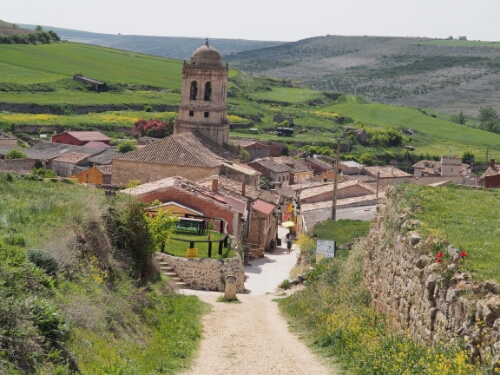 I found the albergue Sarah had reserved, checked in, ordered a beer, and spent time chatting with other pilgrims. I became a bit concerned when Sarah didn’t follow quickly — she’s usually so much faster than me. She eventually texted me that she was at the small albergue I’d passed. With things out of my hands I showered, and prepared my laundry. Eventually she and Jonathan arrived. They’d stopped in the albergue to use the swimming pool with two others, Karla and Marco, who I met later when they arrived. Karla’s knee was in pain and Marco suffered from shin splints. Both had blisters.

Jonathan and I had the pilgrim’s dinner that night while Sarah cooked for herself, Karla, and Marco. Later we all shared beers.

Before sleeping I went out to the tiny chapel at the entrance of town. Like many towns in this region, Hontanas sits nestled below the plains in a valley. The ermita was at the entrance, high enough to feel the cold wind in the night. My flashlight led the way. Inside there was a small wooden bench, a statue of the virgin, and decorative paint along the walls. I went back to the albergue to sleep.

Today Jonathan left first, not planning to go as far as us. Karla had a blister that was in bad shape and I helped her treat it. Sarah left; we’d meet in the next town or before. I’m no medic but I tried to keep a reassuring presence as I helped Karla. Marco dubbed me “The Doctor.”

I began my walk. 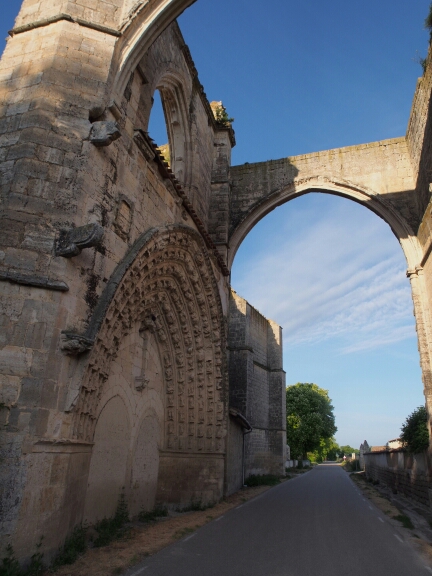 I met up with Sarah and Jonathan after the ruins of an old convent, San Anton. They were exploring a small ruined home on the side of the rode. From there we walked together to Castrojeriz, marveling at the castle on the hill above and the beauty of the church just outside the town. We ate breakfast and then Sarah took her alone time again, so Jonathan and I walked. 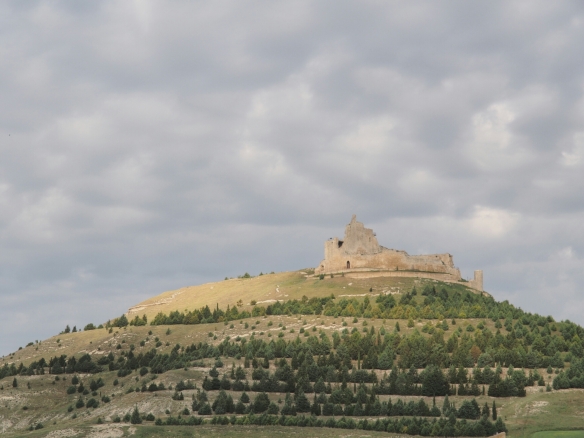 The road took us out and up a tall hill, Alto de Mostelares, where we had an broad view of the path we’d walked and the distant castle-topped hill. Clouds rolled over the valley but kept well clear of the peak we climbed. Sarah and I sat a bit taking in the view, then she went off to do some yoga and walk on her own.

My pace was quick as I felt very good, though later I’d discover blisters on my left foot. I passed Sarah eventually, then waited up for her and Jonathan near a river crossing. We all entered town and had a picnic style lunch with some of our camino friends, and then carried on.

After much heat and sweat and sunburn we arrived in Boadilla as a group. We checked in at the albergue, which looked unimpressive from the outside but on the inside had a nice courtyard. The pool wasn’t open. Qué pena. I tended to my blisters with the help of a group of younger people I hadn’t met before, had dinner, sat with Jonathan and Sarah and friends, and came here to write. Soon I’ll sleep.

Emotionally I’m a bit tossed around. I had some impressions about how these days after the Italians would go, and those don’t seem to have been right. Walking is different now than it was before. I’m looking at it as a chance to learn, even if I’m relearning something life has tried to teach me over and over.

I realize that’s all a bit cryptic. But I need time to process, so bear with me.

The Camino goes on. I’m still a long, long way from Finisterra.