I’m more than half way to Santiago now.

Chiara and Lidia shared with me a saying about the Camino. In the beginning, you forget the world you left behind. In the middle, you die. And in the end you’re reborn.

These past days have surely been the part where I died.

I’ve traveled from Boadilla to Carrión de los Condes, taking the river route when it was available. Then from Carrión to Terradillos de Templarios. And today I’m writing from Calzadilla de los Hermanillos.

There were physical challenges on this route, mostly to do with the heat. My feet have their first blisters, and my knees ache, and my pack is heavy again.

But the majority of the difficulty was emotional. I fundamentally misunderstood the nature of my new Camino family. I’m choosing not to go into detail. Some people want to travel with the people they meet. Some people want to travel alone in the same direction as the other people they meet. Both enjoy interacting with their fellow pilgrims, but some seek a connection that grows with intent, while others prefer to leave it to fate.

I prefer the connection that grows by choice instead of chance. When people enter my life and we have the beginnings of a friendship that could be deep and lasting, but we know that time is short and soon we’ll say goodbye, perhaps for forever, then I choose to make the most of that time with those people. To enjoy their presence and thoughts and jokes and laughter to the fullest before the universe takes it away. To coordinate with them to maximize our time together. It was chance and fate enough for me that we met at all; people from all around the world on one road for a brief time, randomly together in one corner of a tiny ball of dirt hurtling through the cosmos. That’s enough serendipity — the rest is on us, I think, to gain as much from each other as we can in the time we have.

I’m sure there’s nothing wrong with the idea of passing in and out of each other’s paths by chance. But it ain’t for me.

Now, enough of all that. That’s probably not what you came to this blog for. Let’s talk about today: from Terradillos to Calzadilla. 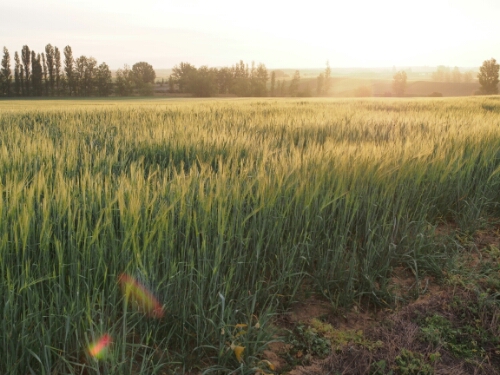 I woke early and set out as the sun was rising. My knees ached more than usual, and my pace was slow. I didn’t break until Sahagún, where I had coffee and pan con chocolate, which has become my usual pilgrim breakfast when I have one. I sat with a woman I’ve met many times on the trail, who lives in Mammoth in California. Embarrassingly I long ago forgot her name. I’ll have to own up to it and ask her when I see her next.

As I ate, Sarah and Jonathan came over to my table to say hello and to find out what route I’d be taking today. After Sahagún, the Camino forks. One route, by far the most popular, runs along the highway through a few cities towards El Burgo Ranero. The other route passes through Calzada de Coto and joins an ancient Roman road.

If you know me, you know which I chose.

When the path split, every pilgrim I could see in front of me stayed on the popular route. I entered Calzada de Coto alone, no pilgrims in any direction. Spanish pueblos are usually eerily quiet when we’re passing through. Sometimes because it’s too early, other times because we’re walking during siesta, and other times because the pueblo only has a population of 80 or so. This pueblo was no different, and I walked through it slowly to avoid missing any yellow arrows. Eventually the main street ended and the Roman road began, passing over fields and farms. The day was blessedly overcast as there were little to no trees large enough to provide shade.

When I step out onto a Roman road, I feel the immensity of that connection through time. I can envision the great network of roads that spanned the Western world in a time when such a thing was an engineering marvel. I imagine the scuffing of the boots of Roman Legionnaires and medieval pilgrims alike, and the creak of wagon wheels and clink of merchants’ goods. Just as when I stood on the Via Appia south of Rome, here I could feel some sense of my position in the universe and the history of civilization; the domino of cause and effect that eventually led to me, here, on an ancient road of dirt and stone on the Iberian peninsula.

In time other pilgrims caught up with me. David, an Australian I’d met the night before with a camera around his neck. Kasumi, the Japanese girl in the bottom bunk below mine who is learning Spanish. A new face,  Bob from Connecticut, who had switched careers and become ordained.

The road was easy and quick and we arrived early in Calzadilla de los Hermanillos. The others went to a private albergue near the entrance. Kasumi rushed along to the municipal albergue, a very small former school with just 22 beds. I went there also. Shower, laundry, and here I am typing. A typical pilgrim route for me now, though the typing part was tough on the very long days.

Tonight if I have time I’m going to upload a post with only pictures, since some of the most recent posts were lacking.