This should probably be the big, exciting, epiphany-laden post, right? Not yet, I’m afraid. I’m here in Santiago, in a fancy-schmancy pensión hotel with towels and everything. Fancy by pilgrim standards, anyway.

We left O Pedrouzo a bit late. The room was very chilly and it’s no easy task getting out of bed in the cold. There were 20 kilometers between us and Santiago, and for much of it the extended family walked together. The Camino around here isn’t as enchanting as it is in the early etapas in Galicia. More streets, fewer magical forests.

The reality that I would reach Santiago today didn’t settle in for a while. Actually, it hasn’t settled in at all. Tomorrow I’ll stay here for the day. It will be the first time in 30 days that I haven’t woken early, packed my bag, laced up my boots, and trekked to a new town. The Camino isn’t done for me — I go on to Finisterre. But there’s an overwhelming feeling of finality here. I even feel aches that I haven’t felt before, as though my brain has given my body the go-ahead to start reporting all the damage I’ve done to it.

We stopped for drinks at a bar called San Marcos, where there were campgrounds. And also chickens, rabbits, and a large goose all wandering free, except when the bartender saw them nearing the tables and ran at them, arms flailing to chase them away.

The sun hid and the chill grew worse as rain clouds came closer. I saw Stacy, the woman from California I’d spoken to often and occasionally walked with, as she entered the bar. I walked over and said hello. We hugged; it had been a while since we’d seen each other and neither of us was sure we would again. The bartender snapped our photo and I went back outside.

After collecting a few photos of the unfriendly goose, I threw my backpack on and joined Miguel and Larissa in leaving the bar. The others stayed behind — they often enjoy longer breaks than I prefer. I like to keep the rhythm going.

We carried on towards Santiago as it began to drizzle. We passed Monte de Gozo, stopping briefly at the pilgrim monument there. As we entered the outskirts of the city Stacy caught up and we spoke a bit about the news from Santa Barbara. 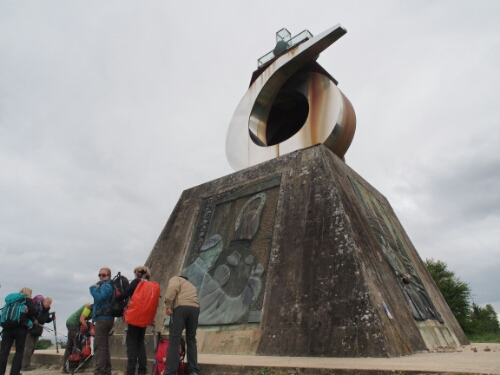 It was two kilometers to the city center. The camino brought us around the side of the cathedral before revealing the expansive plaza in front of it. We walked to the center and dropped our bags to the ground. We sat, we stood, we hugged, we took photos holding our backpacks high in the air. Victory.

Then we ran around looking for a place to sleep, and settled on the fancy-pants pensión.

Showered and changed, we walked to the Pilgrim’s Office to receive our Compostelas. The line was long but quick. I was greeted by an Australian, given my Compostela by a Spaniard, and I bought a tube from an Irishman to store it safely. And now it sits, hopefully secure, in my backpack. A long walk for a piece of paper — thank goodness that isn’t the point.

We went for coffee and found the others. I took portraits, of course. 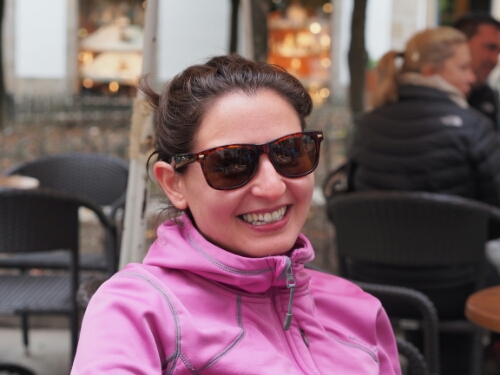 Luca, immortalized as he saw fit. 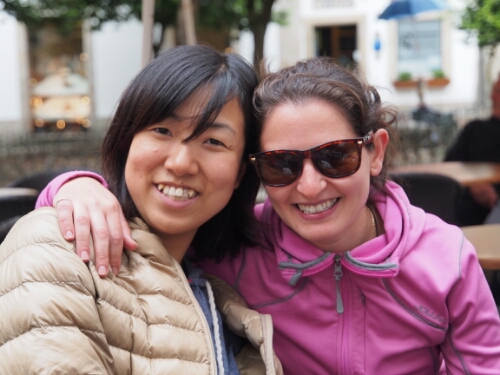 Then we went to the Parador, to the old garage off to the side. It’s a quasi-secret that the first ten pilgrims to arrive there for breakfast, lunch, or dinner must be served for free. It’s a requirement by law, I’m told, and part of an old tradition. Here’s another secret: even free, it’s not worth the price. The food was bland; a product of obligation rather than pride. Go to a restaurant and buy a good meal. You earned it.

I was interrupted while writing yesterday when Virginia messaged me. The group was down in a bar near the cathedral. Miguel and I decided to go, and as we were preparing Larissa came back from a walk and joined us.

We joined the group just as Fabrizzio and Ignacio were leaving. Virginia, Luca, Alejandro, and Kasumi were still there. Over drinks and tiny sandwiches, called montaditos if I remember correctly, we convinced Kasumi to stay in town an extra night so that those of us walking to Finisterre would be leaving on the same day.

We drank, we ate, and then we wandered out to find another bar for orujo. We didn’t find it. Instead we stumbled across the same group of older Catalan men we’ve seen often. They were piss drunk. We all wandered together to a nearby club/bar where the Catalans ordered a queimada — a bowl of orujo blanco, with coffee beans and orange and lemon, set aflame before serving. The server passed out papers with an incantation on them; something in Gallego about witches, spirits, and other things that go bump in the night along with the forces of earth, water, and light being called on to help make the drink. Next Halloween, queimada in Los Angeles. 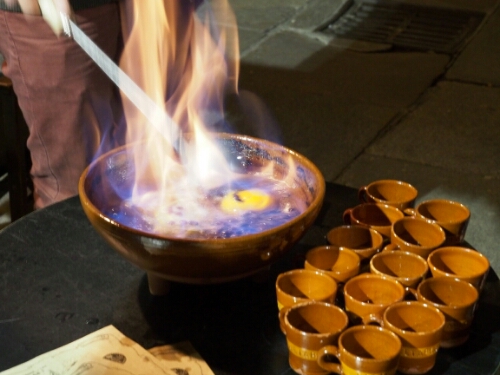 As the flames in the bowl burned higher and higher, the chanting began. I kept my camera trained on the bowl and recorded video, complete with the drunken slurring of the group as they read the words. Finally it was all served. Strong stuff. After a cup of it you feel the fire in your belly. Helpful on a cold night in Galicia.

Before we left we said goodbye to Virginia. She’s on her way back to Granada now.

This morning I set out to find breakfast but instead I found Juanito. We talked a bit before I moved on, and immediately I found him again in the plaza in front of the cathedral. I walked on and came across Larissa who had left the habitación before me, and hurriedly tried to bring her to Juanito — but he had disappeared.

Except he hadn’t. We went into the cathedral before mass and I saw him there. With Larissa and Juanito reunited, I went down to the tourist’s office to get a map of the route to Finisterre, and then returned for mass.

I sat with the two of them, a statue of San Tiago surrounded by gold decorations of angels and cherubs and saints before us. The mass began. They called out the names of the many cities along the road where pilgrims who received their compostelas the afternoon before had began, and announced the countries represented in each group. Saint Jean Pied de Port: Brazil, South Korea, the United States of America…

We took each other’s hands for a moment.

In a quiet time I prayed on behalf of my friend Daisy as she had asked me to do when we met for dinner before the big trip. We first met in Spain and both live in Los Angeles.

As the mass continued with beautiful song, I found myself beginning to comprehend the end. Beginning to understand that the faces that I’ve seen and seen again over and over on the Camino — sometimes of dear friends, others to whom I never said more than “Buen Camino” — would soon leave my life. I felt the water in my eyes but held it back.

Juanito never holds back; it’s one of his endearing qualities. And as he cried, I found myself crying a bit too. It passed.

We left and found Miguel. We’d planned to go for lunch but the plan changed. Larissa and Miguel would go buy non-pilgrim clothing. I don’t need that, so I went to get food. On the way I met Juanito and three South Koreans. He said they were all going to lunch in some market nearby. I went along. We wandered and wandered and I had to stop and ask for directions a few times. Finally we arrived and found that the market had no restaurants. And Juanito said he had promised some other people he would eat lunch with them, so he left. There I was with my three new Korean friends in a market without a restaurant!

We turned back up the street and stopped for lunch along the way. I got to know them a bit, and they me. When they asked me what I did and I told them, they followed by asking what movies I’d worked on. And at the end of the list they clapped! A very odd feeling.

I guided them back to the cathedral and we said goodbye. I had to be back at the room by 3 to meet Larissa and Miguel.

I arrived and we immediately left for a meal with Alejandro. Paella. Not the best, unfortunately.

Back the the pensión my parents messaged me. They looked up some flights for me to return. June 4, from Madrid to New York.

I have a ticket now. Talk about finality.

Tomorrow I leave for Finisterre. Three days. Then I’ll need to get a bus back to Santiago, and a train to Madrid.

Though I’m still thinking I might stop in Portugal if there’s time. It’s so close and I’ve never been. But I have to be sure I can make it to Madrid in time for the flight.

Short answer: probably too much. Camino veterans recommend a light pack, somewhere around 10% of your body weight. Since I’m choosing to carry my camera and a few lenses, along with this tablet for blogging and photo backup, my pack is up to around 22 or 23 pounds, which is closer to 15% of my weight. So if you’re a future pilgrim scouring the internet to see what others are carrying, you’ll want to bear that in mind as you read the list.

END_OF_DOCUMENT_TOKEN_TO_BE_REPLACED

The Camino is also known by a nickname, La Voje Ladee. The Milky Way. At night the galaxy hovers above as if to point peregrinos towards Santiago de Compostela. Medieval myth held that the celestial Milky Way was formed from the dust loosened by pilgrims’ boots as they walked. And though disputed, it’s said that the word “Compostela” may come from Latin campus stellae, “field of stars.” END_OF_DOCUMENT_TOKEN_TO_BE_REPLACED