In the morning clouds and mist rushed over the mountains, and the roofs of the old thatch and stone buildings of O’Cebreiro were covered in a light layer of snow. We bundled up and hurried to the same restaurant we’d had dinner in, Venta Celta, to enjoy a quick breakfast. I briefly walked around the city to snap photos before we left via the path behind the albergue that leads into the forest. 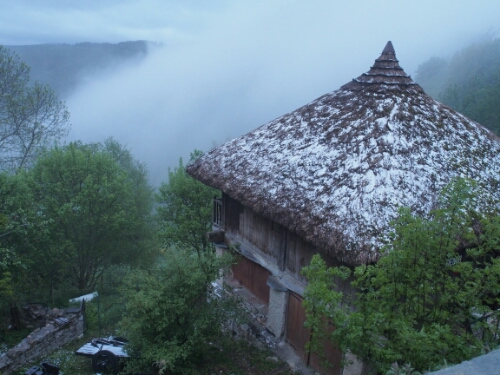 As we put the city behind us we turned for one last look, but it was gone. Shrouded by the mist, it felt like a scene lifted straight from cinema. The ghostly city that disappears after the protagonists leave, taking its spectral residents with it.

We walked through the cold. On either side of the path the flowers and plants drooped heavy with snow. Clearly they were as taken by surprise as us that winter isn’t yet over.

The walk was a simple one, not flat but not arduous. We passed the Alto de San Roque, where a sculpture of a medieval pilgrim stands forever trapped in mid-stride, clothes blown back by the wind, looking out over the mountains. We quickly snapped photos with icy hands before moving on.

For lunch we stopped at a restaurant and albergue in Fonfría called A Reboleira. Inside the bar was a small round dining room shaped like a hut, with celtic music playing. Larissa asked Alejandro if the music was local and he said yes. I was surprised since it sounded more Scottish or Irish to me. Apparently there’s a very heavy celtic influence in Galicia, which I suppose makes since given the geography. But I had no idea before now. 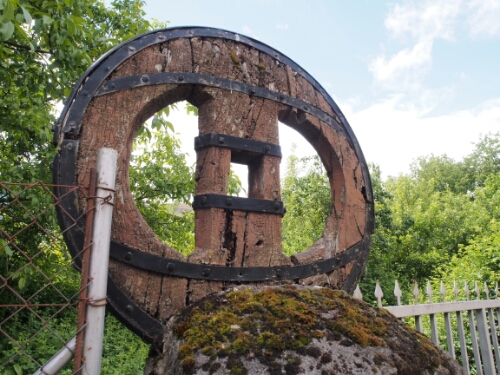 In time we descended into Triacastela, a very long and stretched out pueblo. Our albergue, the municipal, has only four beds per room. So finally we may be able to sleep without someone deciding to flick on the lights at precisely 6am and begin talking as loud as if it were midday, which has been a problem in the last several albergues. Some people go to sleep very early, and we have to tip-toe when we go to bed so that we don’t disturb them. But then they wake up at 5:30 or 6 and make all the noise in the world. Oh well, pilgrim life.

We ate dinner nearby, and after enjoyed chupitos of crema de orujo. Then we enjoyed taller glasses of the same. Given the rough walking yesterday it was nice to unwind, drink a little too much, and laugh a little too loud.

Tomorrow we’ll reach Sarria, which will put us just 115 kilometers from Santiago. Jonathan asked me this evening, as Larissa and I were enjoying some chocolate, if I was starting to ponder the end. I wrote my thoughts about that in the previous entry. I told him I’m trying to keep my mind here on the trail for as long as I can. I don’t even have my return flight booked yet, and I don’t particularly care. That can wait.

There are two beautiful horses just outside our window.